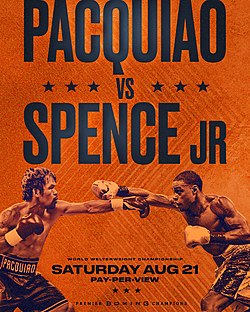 Update: Errol Spence, Jr. was reported to be out of Manny Pacquiao fight due to a left eye injury. The Cuban boxer champ, Yordenis Ugás will replace him to face Pacquiao instead. Read about the Pacquiao vs. Ugas fight from the link.

It seems that Pacquiao vs. Spence fight is the last boxing event that the legendary Filipino boxer, Manny Pacquiao will be into. It will be his last at least for now. This is what it looks like since the Filipino boxer already announced his intention to run as president of the Philippines in the 2022 Presidential election. Despite some obstacles and issues with his current political party, the boxing senator shows his decisiveness in becoming the next president of his country.

Of course, its not likely that there will be a boxing President (in case he wins the election). So we can assume that the Pacquiao vs. Spence fight on August 21 (in the US) is his last and final ring fight.

Manny “Pacman” Pacquiao will be fighting Errol Spence, Jr. on August 21 this year at the T-Mobile Arena in Las Vegas, Nevada. Spence is much younger and an unblemished record with a perfect score in his record.

Now, will this final match of Pacquiao will be Spence first defeat or will the Filipino champ will be added to his long list of defeated boxers. Let’s find out together and watch Pacquiao-Spence match on the said date.