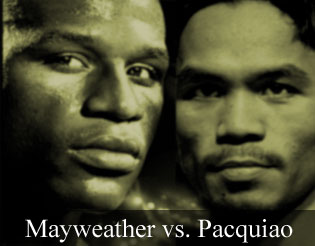 Today, Manny “Pacman” Pacquiao, the crowned pound for pound king, said to the press that the next opponent that he wants to fight on the ring will be the undefeated Floyd “Pretty Boy” Mayweather Jr. not the first rumored opponents Shane Mosley nor Miguel Cotto. He also believe that the undefeated, fast and furious defender “Pretty Boy” will win against Marquez on the Mayweather vs Marquez match this coming July 18 of the year. If in case that this will be pursued and agreed upon by the two camps, the tentative schedule for the said Pacquiao vs Mayweather match will be on October of this year.

I think Mayweather needs to win first his come back match before he can say something about this issue. He should prove to the boxing fans world wide that he is still the same “Pretty Boy” boxer that they’ve seen on his peak years. Well if this will happen in the future, I am sure PPV and tickets earnings will surely be one of the top grosser of all boxing fights in the world.

Later, I will update this blog for more news about this upcoming match.

why are you demanding so much in terms of testing?as if you rule the boxing world.40-0 your a_ _!kamunggay lng do! mao na iyang sekreto.daghang kng mama,fight pacman as stated AND sanction by the nevada state comission.your afraid because you will fight a true brawler.you dnt have the power you have the “gulang”.your name must be floyd “THE HIT AND RUN” GAYWEATHER.

Floyd will knock Manny’s ass out cold when this fight takes place early next year. No doubt in my mind!

Ahhh shut-up floyds all talk manny can knock him out in the first round i betchu ,floyds got nothin but no worries he wont be talking aftah manny busts him mouth

i cant wait to see my hero vs pretty face match.

i cant wait for Pac-man vs Pretty Face match. pls can i buy 10 tickets pls…..

@junel, I think Mayweather is just doing some noise to make the fight to be noticed by boxing fanatics. It seems that some of his “money” making style are working but not as good as the Pacquiao vs. Cotto match which I think covered all the enthusiasms build for the Mayweather vs. Marquez, IMO.

I want to praise and salute pacman for his archievement so far in his boxing carrier especially his last two fights against oscar delahoya and hattin..hitman, i was his fan during all this wounderful period, but today the music has changed different sound, it is unfortunate for pacman to be on the list of so called big guys whom shall one by one becOme KING FLOYD MAYWEATHER JR’S VICTIMS.

wow! Manny Pacquiao and Floyd Mayweather Jr. ring fight? what a great fight! i can’t wait to see them on the boxing ring and for sure that this will be most awaited.. Go Sir Manny Pacquiao! You are really the Filipino’s pride!